The examples below illustrate how we model attribution (who is the source of a claim, what is their commitment to the claim (is it certain/probable/possible), do they confirm or deny? etc.)

The main idea is that we maintain simple statements without this information on the instance level. Each mention may assign different attribution values to this statement (different people may claim the same thing, some sources may say something is true, others that it is false, etc.). The proposal is described in Beloki et al. (2015). 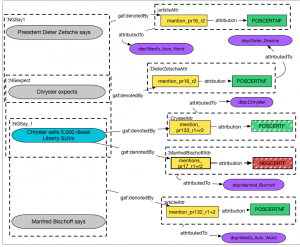 Simplified Illustration of how we model alternative perspectives on a statement. 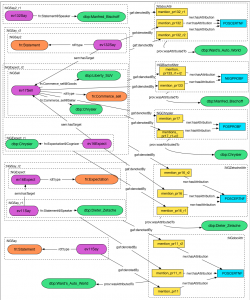 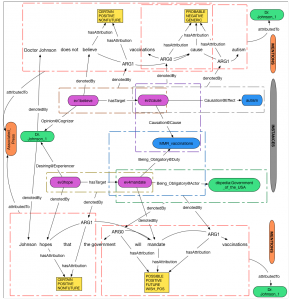 Illustration of how we model alternative perspectives on Vaccinations

A simplified image of a GAF model:

The examples below were created while GAF was in its initial stages. They are present on this site in order to document how GAF was developed. They also provide more simplistic examples of GAF representations that are suitable for getting a basic impression. It should be noted that they may contain errors and certain relations are no longer used in GAF representations. Please use more recent examples as a reference to get an accurate impression of GAF in its current state.

Illustration of a GAF annotation for:

A 9.1 temblor in 2004 caused a tsunami that swept across the Indian Ocean